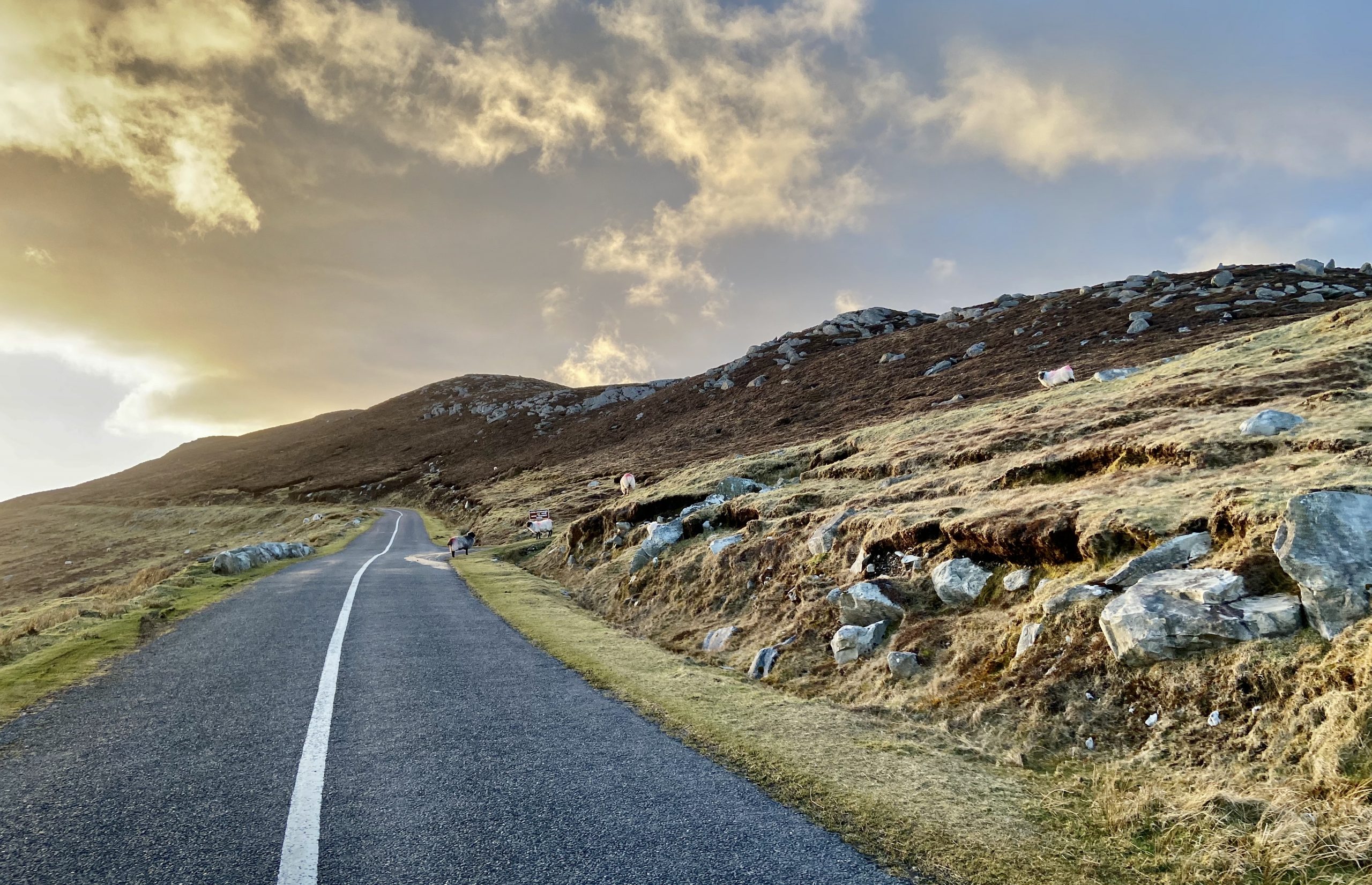 Ireland may be an island and the 3rd largest in Europe,  but there are more than 80 off Ireland’s coast. Most of them are on the Wild Atlantic Way coast with Achill island being the largest, Inis Mór on the Aran Island the 2nd largest and Valentia Island being the 3rd largest. Some islands are connected by bridges to the mainland, but most rely on a variety of ferry services to get you to the islands. Not all the islands are inhabited with about 20 occupied full-time, others are occupied in summer only.

1. Best island’s to visit in Ireland

3. Islands of the Wild Atlantic Way

The famous Skellig Island are over 11 km off the west coast of Kerry. We offer an Eco Boat trip around Skellig Michael and Little Skellig Islands, which are UNESCO-protected islands. The boat trip with an expert local skipper and view these dramatic rocky outcrops where hermit monks lived from the 6th century. Admire the views of the larger Skellig Michaels as it rises sheer from the Atlantic and was made famous recently by the Star Wars. The boat has a toilet for your comfort. These trips are very popular due to the Star Wars connection so early booking is advised.  Unpredictable seas mean we do not land on the islands.  Eco boat trips take place from the start in late March to mid-November, depending on the weather.

Valentia Island ( Inis Dairbhre) on Iveragh Peninsula, west of the Ring of Kerry in 11km by 2 km, and is 3rd biggest island off the Irish coast.  Valentia Island is connected to the mainland at Portage by bridge and a Car ferry from near Caherciveen in summer. A drive around the 2 lanes of Valencia Island, with its fuchsia hedges and stunning views, is magical. Take a walk at Brow Head, the Slate Quarry, the Lighthouse visitor centre or the tetrapod’s footsteps. Kingstown has had the transatlantic cable station since 1866, linking the US with Europe. This was the ore-requisite of the Internet today. Water sports, swimming, boat trips to selling or angling are all to be enjoyed on Valentia Island.

The Blasket Islands lie off the Dingle Peninsula in West Kerry. The largest, the Great Blasket, was inhabited until 1953 and was known for storytelling and a number of important books were written by islanders such as Peig Sayers and Tomas O’Crohan ( link).

The island is only occupied in summer and a ferry trip to the island is well worth a half or full-day trip. There are walking routes along the cliffs make sure to wear hiking boots and rainwear and bring water and snacks. The island is abundant in wildlife and seabirds such as puffins, gannets, kittiwakes, and guillemots can be seen on the island cliffs in the summertime, along with Canada Geese and other rare birds in the winter months. The seas are rich in food which attracts dolphins and whales and there is a permanent colony of seals that breed on the Blaskets beach and in a summer move to the smaller uninhabited islands.

The beach is great for swimming after a walk on the island. We recommend taking an early boat to the island from 9.30 am, pre-booked of course, as space is limited.

The Blasket Centre can be visited on return to the mainland, which gives a deeper understanding of the island’s heritage, literature, and people. You may like to pay a visit to the graves of  Peig Sayers in the nearby new graveyard or of Tomas O’Crohan in the old graveyard with its headstone sculpted by Seamus Murphy.

At the mouth of the River Shannon is uninhabited Scattery Island (Inis Carthaigh). You’ll find the remains of a 6th-century monastic settlement of St Senan, a castle, an Elizabethan tower and ruined houses. A ferry operates from Kilrush Pier and there are guided tours in summer.

The Aran Islands (Oiléan Árainn) are three islands in the Atlantic at the entrance to Galway Bay. They are Irish-speaking Gaeltachts, famous for Aran sweaters, and tourism is a major part of their economy. Access to the islands is by ferry from Doolin in Co Clare or Rosaveal in Co Galway or by air from Pier Aran. There is a connecting bus service from Galway to Rosaveal.

The landscape is barren wild Karst limestone and bicycles are available for hire to enable you to see plenty. Minibus tours and horse and trap tours are also available on Inis Mor, the largest island.

Inis Mór  (Large Island) is 14km by 3.8 km and is the most visited island with a ferry from Doolin or multiple ferries from Rossaveal. Ferries land at Kilronan village which has accommodation and dining options with lively music available at night. The island’s prime attraction is the amazing Dún Aonghusa stone fort on a cliff overlooking the Atlantic. There are many other sites on the island which deserve a few day’s visits, rather than the day trip most people make. As in each of the islands, there is music in the pubs and lanes to walk or cycle.

The Island Region of Connemara is a driving route in a Gaeltacht area 56 km west of Galway city. Bridges and causeways link the islands of Eanach Mhéain, Leitir Móir, Garumna, and Leitir Meallain, with beautiful scenery to admire. There are many sandy beaches down lanes off the main road. It’s a great area for cycling or you could try one of the walking routes

Inishbofin 10km off the west Connemara coast in Co Galway is 5.5km long by 3km wide and is known for its traditional music sessions with many local and visiting musicians playing in the bars. The scenery is wild and there is a wide variety of flora and fauna with loop walks around the island. It’s home to the corncrake, one of Ireland’s most threatened birds. The two beaches have crystal clear water ideal for scuba diving and the natural harbour is an ideal base for sailing. There are a number of restaurants for dining options. A twice-daily ferry service operates a 30-minute crossing from Cleggan Pier in Connemara.

Omey Island, Co Galway is a small island you can walk or drive to at low tide. It’s largely uninhabited and has the main burial ground for the region, using an ancient burial area connected with St Brendan. It has a holy well and the ruins of Feichin’s Church are among th many antiquities. Spend a day wandering the island or swimming at its sandy beach.

Inishturk Island, Co Mayo is a small island between Inishbofin and Clare Island and is 5km long by 2.5km wide with a population of under 60. The island is known for its unspoilt environment, birdlife, archaeological sites and a Martello tower. The ferry operates from Roonagh Pier 5 days of a week and the crossing takes 60 minutes.

Clare Island is at the entrance to Clew Bay off the south Mayo coast. The island is famous for its 16th Century castle built by the pirate Queen Granuaile /Grace O’Malley. As you approach the island pier the castle and a long sandy beach dominate the landscape. Walk the island paths, swim at the beautiful beach or take part in one of the water sports activities. There is a famous lighthouse to stay in or an island hostel. The ferry from Roonagh Pier operates daily and takes just 10 minutes.

Achill Island, Co Mayo is Ireland’s largest offshore island and has easy access by a road bridge. The island has the highest sea cliffs in Europe, which you can walk to. A drive along Achill island will give you access to 4 stunning Blue Flag beaches. Cycle the island with easy bike hire or cycle from Westport along the Great Western Greenway. The island is known as an artists’ retreat thanks to its beautiful scenery and there are lots of activities for all the family.

Inish Bigil is a small island off the Mayo coast, with a close-knit community of farmers and fishermen. The current between the island and the pier at the mainland at Ballycroy is one of the strongest in Europe. It’s unspoilt and offers magnificent views of the Mayo coast. It’s ideal for a day walking, with bike hire also available.  Take a ferry from Doran’s  Point, Ballycroy.

Tory lies 14.5km off the Donegal coast and is the most remote of Ireland’s inhabited islands and wild its cliff scenery and great views of the mainland coastline. It is about 4km long and 1.2km wide. Its population of just over 100 are Irish speakers and is famed for its traditional music which inspired the world-renowned Donegal band Clannad. The ferry service runs from Magheroarty on the mainland and varies by season (toryferry.com). The crossing can be very rough, particularly in Winter.

Aranmore Island, Co Donegal is accessed by ferry from Burtonport with a car and passenger ferry. This Gaeltacht island has a population of over 500 people with music, history and warm Irish culture of music and language. There are many outdoor activities and a great place to bring a camera to do some photography.

Best 10 Family Walks in Cork City and West Cork. Where to walk with Buggy or Wheelchair, off road.... read more

Planning a Vacation in Ireland

What's Open Wild Atlantic Way This summer is going to be another staycation season as foreign travel will not be... read more

Best of Co Clare, Ireland - Fact Sheet . Why Visit, where to go and what to do... read more

The Islands of Co Cork, how to get there, what to do on each island and how to book.... read more