Colourful Towns and Villages  of  the Wild Atlantic Way

The Wild Atlantic Way is famous for the beauty of its dramatic scenery but it also has many picturesque and colourful towns and villages. The locals have a great sense of pride in their town or village and paint their houses in a variety of hues, contrasting with the green of the surrounding countryside. Many have flowers in abundance and you will want to take lots of photographs even on a grey or misty day.

Some of these villages are slightly off the Wild Atlantic Way route and it’s worth diverting to discover some of the hidden gems of Ireland.

Kinsale at the southern end of the Wild Atlantic Way and less than 30 minutes from Cork Airport is known as Ireland’s gourmet capital. It’s also one of the most vibrant looking towns on the entire route with narrow streets and lots of cafes, restaurants, pubs, galleries and bookshops to explore.

At the northern end of the Wild Atlantic Way, Malin Head is over 2 hours drive from Donegal Airport at Carrickfinn or Belfast Airport.

Schull is one of the colourful villages in West Cork

Schull, West Cork on the Wild Atlantic Way is an essential stop on the way to Mizen Head, Ireland’s most southerly point. Park at the eastern end of the village in one of 2 car parks  (just before the Catholic Church or turn left towards the pier after the Church for the second one). Discover some of the galleries and craft shops, explore the bookshop or have lunch in Hackett’s or Newman’s pubs. Some of Corks best-loved beaches are west of Schull,  go surfing or walk to Mizen Head lighthouse. Take a guided Photo Walk or a boat trip around Fastnet Lighthouse.

Hint – There’s a great playground for children below the first car park. It’s a lovely place to eat a picnic lunch and there is a great food truck at the lower car park.

The village of Eyeries is 50 metres off the main road on the north side of the Beara Peninsula and is well worth a stop. Each house is painted a strong primary colour making it one of the most colourful villages on the whole of the Wild Atlantic Way. It has a few small supermarkets, a petrol station and some pubs.

Hint –  Park at O’Sullivans and walk up the village. Buy some food for a picnic in Derreen Gardens further along the route or at the top of the Healy pass, which is slightly off the route but offers one of the best views in Ireland. 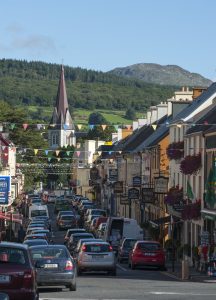 Kenmare, Co Kerry is a market town at the junction of the Beara and Iveragh Peninsulas. It’s an upmarket holiday destination with many hotels and restaurants. The town is laid out on an X plan, with a one-way route through it. There is plenty of on-street parking apart from in peak season. It’s a lovely place to explore and you can discover a fine church, an ancient stone circle and a lace museum which tells the story of local lace. The restaurants and pubs of the town are welcoming and Thursday is market day at the Square. Drive around the Ring of Kerry or Beara in a classic car for a day. The hidden valley of Gleninchiquin is west of Kenmare on the Beara and is one of  Ireland’s most beautiful valleys for walking.

Hint – At the top of the town is a lovely little bookshop with lots of maps and information on the Wild Atlantic Way. Don’t forget to visit Lorge’s Chocolate Shop where handmade chocolates are made daily.

Sneem in Co Kerry is one of the Wild Atlantic Way’s prettiest villages. It nestles in the mountainous countryside at the estuary of the River Sneem which divides the village in two. One of the first places in Ireland to paint its houses in different colours, it won the Tidy Towns competition in 1987. The village has a fascinating sculpture trail with works by local artists depicting local sporting heroes and some gifted from overseas

Dingle town, overlooking Dingle Harbour in Co Kerry, is famous for its craic, music pubs and the many restaurants to discover. Parking in Dingle is easiest near the Pier (paid) as the streets have a one-way system and are nicer to walk. The many shops include a cheese shop, an ice-cream shop and some shops which are hardware or groceries on one side and a pub on the other. Take a Sea Safari from Dingle, drive the Slea Head Drive with a stop at the Blasket Island Centre and see the many local beaches.

Adare village in Limerick is off the Wild Atlantic Way but as one of Ireland’s prettiest villages it’s well worth a detour. It has a row of thatched cottages, a terrace of arts and crafts inspired cottages, a tourism office and some of Ireland’s finest hotels. Discover the scenic walk along the river Maigue or visit Desmond Castle and the pretty St Nicholas Church where many weddings take place. Adare Manor is a 5-star hotel with a golf course which will host the 2026 Ryder Cup.

Hint  – Foynes Flying Boat Museum, with actor Maureen O’Hara’s collection of costumes and memorabilia, is 25 minutes away and on the Wild Atlantic Way.

Ennistymon, Co Clare, is 5 km inland from Lahinch and is often overlooked on the Wild Atlantic Way route. It’s a great place to wander the long main street with its colourful shops, pubs and cafes. The  German bakery at the southern end of the town has lovely fresh bread each morning. The bookshop at the northern end of the town is well worth a browse, as is the second-hand bookshop up a side street and there are craft shops and art galleries to browse. It is quieter than bustling Lahinch and is the gateway to the famous limestone Burren landscape.

Hint – Get lunch from the Cheese Press of freshly made sandwiches, quiches and cakes.

Kinvara is a small market town on the south side of Galway Bay and often just driven through on the Wild Atlantic Way route. This is a pity as this colourful place is bustling with craft shops, cafes and brightly painted buildings. Dunguaire Castle is on the eastern edge of the village and a photo of Galway Bay at sunset is worth the wait. West of the town is Traugh Beach, one of the Wild Atlantic Way’s great beaches.

Hint – Park down by the pier, off the main street and walk the town in about 20-30 minutes. There are thatched cottages to the east of the town.

Clifden, Co Galway, is at the western end of Connemara and is a busy market town often referred to as the capital of Connemara. The main streets are in a triangle-shaped one-way route and there is ample street parking. Close by are Connemara National Park and Kylemore Abbey. There are great beaches to discover close by and you may see local Connemara ponies in the fields with the annual Connemara Pony Show taking place here in August. The Alcock and Brown memorial in the town celebrates the first transatlantic flight which landed in nearby Derrygimlagh Bog.

Westport, Co Mayo, is a large market town, on Clew Bay with Croagh Patrick mountain nearby. It’s one of Ireland’s most scenic towns with many colourful buildings and a pretty octagonal plaza at the top of the town. There is on-street parking or a large car park on Mill Street. The colourful town has all you need including bookshops, cafes, hotels and a tourist office.  Westport is the gateway to the Great Western Greenway, with a number of Mayo beaches and Westport House nearby. Climb Croagh Patrick if you feel energetic.

Hint – There is nightly music in at least one of Westport’s pubs, with Matt Molloy’s (Chieftans musician) or the Porter House next door being among the most popular.

Mullaghmore is a tiny village beside a long family-friendly beach on a peninsula to the north of Sligo. Small fishing boats leave from the walled harbour and fishing trips can be arranged. The picturesque Classiebawn Castle overlooks the village.

Hint – Take a long walk, go surfing  or horse riding on the beach.

Donegal town is one of the most attractive towns in the county. At the mouth of the River Eske, it’s arranged around a square known as the Diamond. It has a fine castle which provides a great photo opportunity and a number of pretty churches just off the Diamond. The county is famous for its woollens and tweeds and the town has a few excellent shops if you’re looking for high-quality goods.  There are bars, cafes and a hotel on the Diamond and a large car park just off it.  For lunch, the Blueberry Tearooms or Simple Simon health shop and cafe have a good range of food for all diets.  Donegal does not have the same tradition of bright colourful houses as the southern end of the Wild Atlantic Way but you will find many more thatched cottages.

Hint – Grab a picnic and head to one of the many great beaches in South Donegal or go surfing. The Donegal Craft village in Lurganboy 2km outside the town has a range of shops and a cafe.

Contact us with any comments on this post- we love recommendations.  Guided activities for individuals and groups can be organised all along the  Wild Atlantic Way trip –  contact ActivityDays.ie