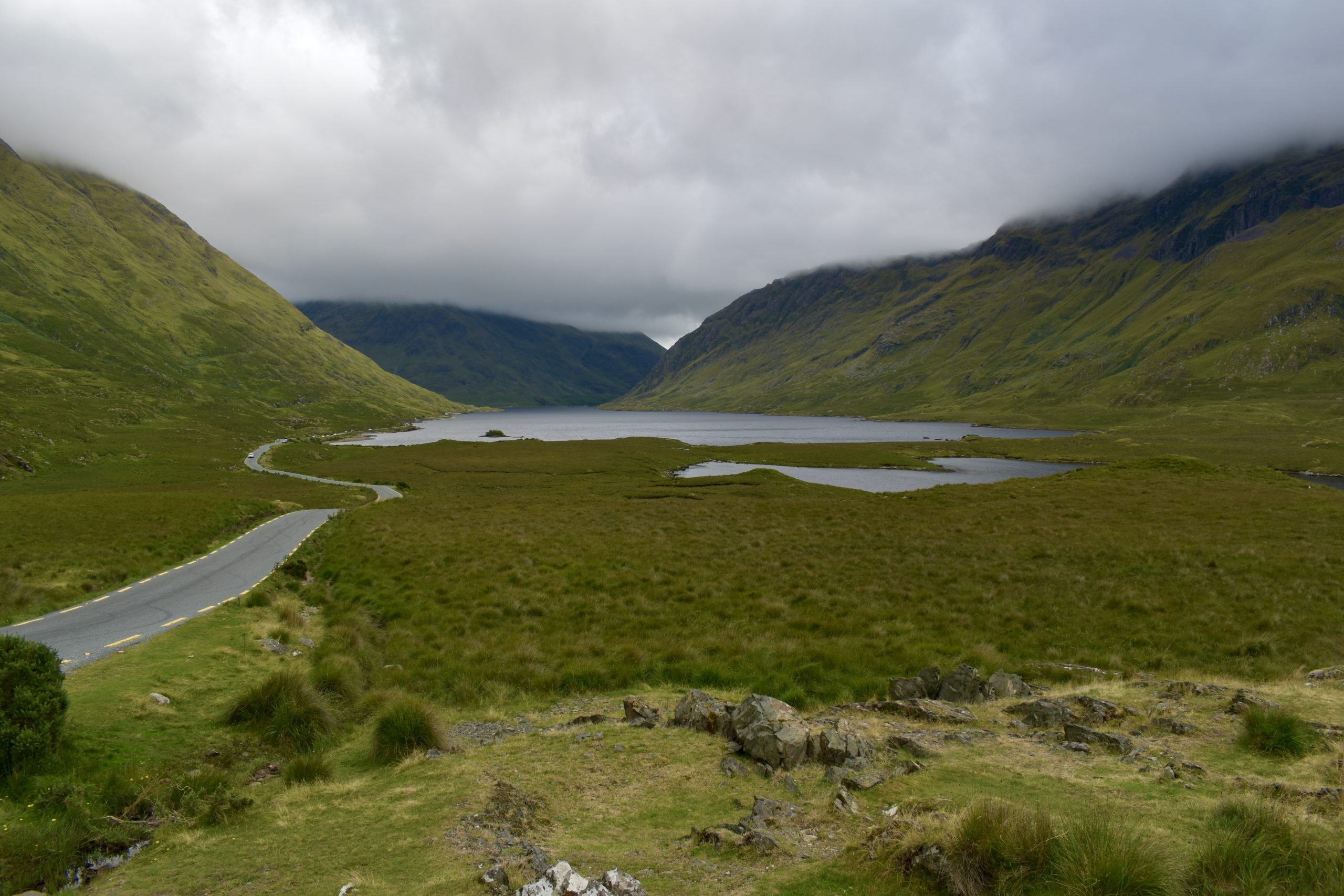 Drive from Westport in Co Mayo to Leenane in Co Galway. There are two routes:

If you’ve spent any time in Westport you’ve probably heard about the Pirate Queen Grace O’Malley/Granuaile who controlled the seas around this area in the  16th Century, with castles to the north and south of the town and on Clare Island in nearby Clew Bay. Westport House was the ancestral base of her descendants, the Lords Altamont of the Browne family. In recent times the Brownes developed the grand Georgian house and grounds into a theme park with lots to do for all the family.  Local company Portwest bought the estate in 2017 and has continued to expand it.

Head out of town via Quay Road which takes you by the harbor with views over Clew bay, famous for its 365 islands, most of which are drumlins leftover from the Ice Age. Continue on the L5840 to link up with the R335 which runs west to Louisburgh. Minor roads to the right lead you down to the waters of Clew Bay.

Croagh Patrick, Ireland’s most famous pilgrimage mountain, towers over the landscape to your left and the most popular access is from the small village of Murrisk. Traditionally people climb the 764-metre mountain on Reek Sunday, the last Sunday of July. For a quieter ascent avoid this day as over 20,000 from all over Ireland make the climb that day. A fitness level of 4 is advisable and the climb will take 3-4  hours for the return trip on a shale and gravel path. It’s best to come properly equipped and you do not need a guide as the path is clearly signposted. At the top is a small church where mass is celebrated on Reek Sunday. Murrisk has a large car park (fee applies) at the base of the mountain, with a visitor centre, cafe, and other services.

Opposite the car park is the National Famine Park with a striking famine ship sculpture by John Behan to commemorate all those who suffered during the Great Famine of the 1840s. Close by is a short laneway to the ruins of Murrisk Abbey beside the sea, an Augustinian Friary founded in 1456 and with an old cemetery on the grounds. You might like to picnic overlooking Clew Bay.

Continue west on the R335 to the pretty town of Louisburgh. It’s a lovely place to stroll around and you can visit the Granuaile Visitor Centre or browse in the craft shops and bookshop. The area has a number of excellent beaches such as Carrowniskey and Bertra Strand and is a center of kayaking and stand-up paddleboarding. Ten minutes further on along the R378 takes you to Roonagh Pier from where ferries leave for Clare Island or Inishturk several times a day.

From Louisburgh the R335 will take you to some of Ireland’s most stunning scenery in the Doolough Valley, an unspoilt upland landscape with three small lakes nestling between the Sheeffry Hills and Mweelrea Mountains. Just before Doolough itself is a memorial cross commemorating one of the forgotten tragedies of the Great Famine. In March 1849 up to 600 starving people trudged the valley in atrocious weather from Louisburgh to Delphi Lodge seeking relief from officials staying there only to be turned away. Hundreds died as a result of hunger and poor conditions.

Sheep dot the hills here and if you are lucky you may see some being driven along the valley by a farmer on a quad bike! At the southern end of the valley, the road turns left to run alongside Ireland’s longest fiord, Killary Harbour. On the hills to your left, you can see the line of the old potato lazy beds used by farmers in times past. Further along is the spectacular  Aasleagh Waterfall on the Erriff River, a well-known salmon fishing water on which a permit is needed. Park at the Wild Atlantic View Point and you can walk right up to the Falls on either side of the river. A key scene in the Field film was shot beside the Falls in and most of it was filmed in the surrounding area in 1990. A short drive south will take you into Co Galway and the pretty village of Leenane on the eastern side of Killary Harbour. Boat cruises are available locally.

Staff Team Building and Meeting for remote staff to get together in Ireland. Trip organised with self-catering or hotel... read more

Best Drives Ireland- the Ring of Kerry. Walks on the route, gardens to visit, beaches, scenic views and... read more

Planning a trip to Ireland. Bespoke tip planning with the best experices and activitie. Make every minute in Ireland... read more

Plan a trip along the Wild Atlantic Way, visiting some of the colourful villages. Plan lots of activity and... read more